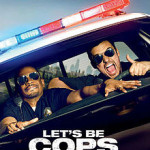 After Justin, a video game designer, unsuccessfully tries to pitch a game about a policeman to his boss who bullies him down, Ryan convinces him that they should wear the police uniforms to their college reunion.

On their way home, they are treated like police officers and decide to play along. Ryan takes it further and eventually the two friends get caught up in trying to catch some criminals.

This movie will not win any Oscars but it was lots of fun from start to finish.