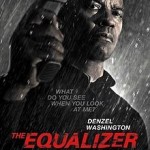 Robert McCall (Denzel Washington) works at Home Mart hardware store. He spends many evenings at a corner café where he befriends Alena aka Teri (Chloĕ Grace Moretz). Alena was a victim of sex trafficking by the Russian Mafia, became their sex slave and was eventually forced into prostitution.

When Elena ends up in ICU after being beaten by her pimp, Slavi (David Meunier), McCall who is actually a retired black ops government operative visits Slavi at his restaurant and offers him $9800 to release Alena. Slavi refuses and McCall pretends to leave but turns back and kills Slavi and his men with their own weapons.

This prompts Vladimir Pushkin to send his enforcer Teddy (Marton Csokas) to hunt the culprit down. Teddy eventually identifies McCall as the culprit and tries to capture him, but McCall is always one step ahead of him.

Another enjoyable Denzel Washington movie. Have watched better though.