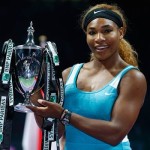 At the end of each year, the Top 8 qualifying women tennis players are given a chance to battle it out at the WTA Finals. Next to the four Grand Slams and the Olympics, this is a career highlight for any player.

The ladies were divided into two groups, each playing three players from their own group in the round robin matches. The top two players from each group then qualified for the semi-finals and the winners then battled out the final.

The top two favourites were Serena Williams & Maria Sharapova and everyone was anticipating their long awaited final. Sharapova had a chance to replace Williams as the No. 1 player in the world, but was however eliminated after losing two out of her three round robin matches.

Williams suffered a shock defeat at the hands of Simona Halep on Wednesday, losing 6-0 6-2. It was embarrassing to say the least for Williams, who played it down but as is well known, it still hurt and she would be waiting for revenge.

Williams was also facing elimination but as Ana Ivanovic took three sets to defeat Halep, it meant that the No. 1 seed managed to qualify for the semi-finals in which she battled her way through a tough 3-setter to defeat her friend and fellow player, Caroline Wozniacki.

Halep easily defeated Agnieszka Radwanska in their semi-final and the stage was set for a rematch between Williams and Halep, albeit sooner than Williams had expected.

The match started off rocky for the No. 1 seed with Halep drawing first blood and having an easier time winning her service games. Williams had however carefully studied Wednesday’s match and knew what Halep’s weak points were. Williams found her form in the seventh game of the first set and from then on it was tickets for Halep and she was handed a tough and powerful tennis lesson by Williams who won 6-3 6-0. Williams had plenty of praise for Halep afterwards, who many feel will be the player to succeed her.

Serena Williams not only cemented her spot as the No. 1 player, she also surpassed Chris Evert’s record of four WTA Final titles, equalling Steffi Graf’s record of five titles and now trailing Martina Navratilova, who has won the title eight times.

Her “never say die” attitude and strong self-belief are testimony that at 33 years old, she is not willing to relinquish her spot at the top anytime soon.

Photographs courtesy of the WTA. 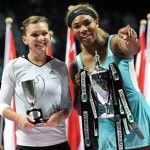