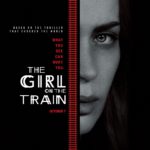 Based on the 2015 best-selling novel of the same name by British author, Paula Hawkins, the movie revolves around the lives of three women – Rachel Watson, Anna Boyd and Megan Hipwell.

Rachel (Emily Blunt), is an alcoholic, whose drinking was sparked by her inability to conceive a child with her then husband Tom (Justin Theroux). Being sterile, combined with alcohol-induced blackouts and destructive behaviour, according to Tom, led to the breakdown of their marriage, when Tom left her for another woman. Rachel lives with her friend, Cathy (Laura Prepon) and has been unemployed for a year (which Cathy is not aware of) due to her drinking habits.

Anna (Rebecca Ferguson) is the woman that Tom left Rachel for and they have a baby called Evie. They live in the house that Rachel and Tom shared and Rachel spends her days travelling to and from Manhattan by train, stalking them. When binging, Rachel often sends Tom text messages and has no recollection of her actions the following day.

Megan (Haley Bennett) is married to Scott (Luke Evans) and are Anna and Tom’s neighbours. Whilst riding on the train, Rachel soon becomes fascinated with this couple whom she sees as having an idyllic marriage, but in effect, things are far from what they seem with Scott being controlling and aggressive and Megan having several affairs, including one with her psychiatrist, Dr Kamal Abdic (Edgar Ramirez).

Whilst riding on the train one day, a drunk Rachel spots Megan in the arms of another man (Abdic), which sends her out of control. She decides to confront Megan about damaging her “perfect” marriage, but suffers another blackout and wakes up later in her apartment with several injuries.

She soon discovers that Megan went missing on the day that she was going to confront her and due to her erratic behaviour of late and inability to recall her movements, becomes a suspect in Megan’s disappearance.

When Megan is found dead and it is established that she was pregnant and that neither Scott nor Abdic are the fathers, Rachel becomes even more determined to help solve the mystery.