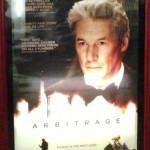 In this movie directed by Nicholas Jarecki, Richard Gere portrays sixty year old Robert Miller, a successful hedge fund manager who runs the business with his daughter, Brooke (Brit Marling).  His family and staff are unaware that he has been cooking the books in order to cover up an investment loss which could see him facing jail time for fraud.  He is relying on the sale of his company to bail him out.

One night, he is involved in a car accident with his mistress Julie Cote and tries to cover up his involvement in order to save the deal and his family from finding out.  Unfortunately several lives are affected and his wife, Ellen (Susan Sarandon) makes her own plans to look after the family…