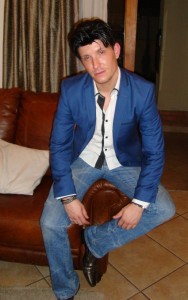 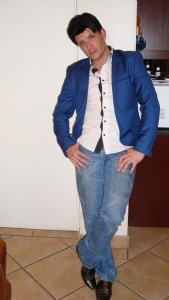 Rudi Claase was born on 11 January 1983 and grew up in Vereeniging with his parents and sister.  He found that everything in Vereeniging was “taboo” and feels blessed to have known at a young age that music was going to be his forte.  He started playing piano by ear at the age of four.  He says his family had two contrasting sides – one being extremely musical and the other, tone deaf which caused a friendly tug-of-war between the musical potential and lack thereof.

At the age of 13 his family moved to Vanderbijlpark, where he attended and matriculated at Transvalia High School.  He always considered himself to be the “class clown” and was not very stimulated by the resources at hand.  He had a wonderful music teacher, who was his escapology and if it wasn’t for her “hiding” him in her classroom and making excuses for him when he didn’t want to attend other classes, it would’ve hindered him from liberating himself from society and being the person that he is today.  He plays solely by ear and puts it down to being ADHD (Attention Deficit Hyperactive Disorder) and impatient.  In saying this, he feels that “God’s gift was big enough to enable me to do what I needed to do and understand music in the way that it came from Heaven and not from something that physicality could’ve presented to me.”

He was blessed to be able to enter competitions and start performing at a young age and then went straight into the music industry, part-time at school and full time after school.

He suffers from bipolar and that combined with being ADHD has its own problems.  For Rudi, being creative of nature he manages his medication so that it doesn’t inhibit his creativity.  Being bipolar means that some days he wakes up and there is no “colour” – it’s dark and grey.  On bad days, he chooses to acknowledge the disorder and work through it.  Knowing that there is a word, a sentence or a song helps him to snap out of it.  On the other hand, he embraces the fact that he has ADHD as he jumps around continuously from one idea to another.  He’s disciplined enough to know that if something is really good, he is able to indulge in it and live in it until it’s finished.

How does he deal with the public and media?

For Rudi it’s a consequence of his profession.  He acknowledges people who recognise him in public as they are the fans that have and continue to support him in his career.  He defines a “star” as “an unattainable something, intangible to the masses, yet when they see you they want you so you have to be really cautious about where you spend your time.  Be careful of putting yourself in places that don’t serve your consciousness, so don’t go to some crazy bar and get drunk because you will be in the papers.”  As he is a very social person he is also mindful and respects his fans and tries to be the “star” that they want him to be.  “One has to remember that there is a fine line between where you have to be and where you choose to be.”

The media aspect is an interesting topic.  He feels that media scandals are always part of the profession.  Everyone is entitled to freedom of speech.  He tries not to judge it but instead looks past it.  To quote one of Maya Angelou’s profound statements, “If it’s not of you, it cannot be you”.  If he see his name on a headline or hears that it’s mentioned in a magazine or newspaper and knows that the article has no relevance to him, he will distantiate himself from it and not read it but at the same time, he feels that there is no such thing as bad publicity.  Your name’s out there and it’s not only your responsibility to counteract it, but to prove the media wrong. 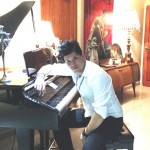 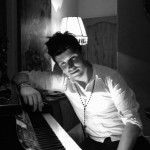 Even though he was already known in the music circles, he became a household name when he collaborated with Corlea Botha on “Ons Lieflinge / Our Darlings”.  They sang together between 2009 – 2012 and during that time were the top selling artists in South Africa and internationally for three years running.

After their split, Zita Pretorius joined him and despite their album going double platinum, it was a mutual decision to part ways amicably.

He has also written songs for the likes of Juanita Du Plessis, Theuns Jordaan, Kurt Darren, Bobby Van Jaarsveld, Nadine, Arno Jordaan and several others.  The song “Tussen woorde” that Juanita Du Plessis requested him to write for her “came” to him whilst in the cable car at the Pretoria Zoo.

He finds that he does his best work at night.  For Rudi the evening whispers are different than those in the day.  He feels that the sun doesn’t confront you with the awareness of what’s around you.  “At night it’s physically dark so the soul has the opportunity to be darker and when it flickers there’s lightness around so the light of the soul bounces around it and presents that opportunity to me.”

What does he love?

He has two “kids”, who don’t always get along with one another.  Picasso, whose nickname is “poefie” as he’s not always good at bathing himself is his Persian cat and Lucky is his Pekingese dog, which he adopted from the Groblersdal Pekingese Rescue Centre.  Lucky is very docile and demands lots and lots of love.  Rudi urges people to visit their Facebook page and he will soon be an ambassador for their cause. 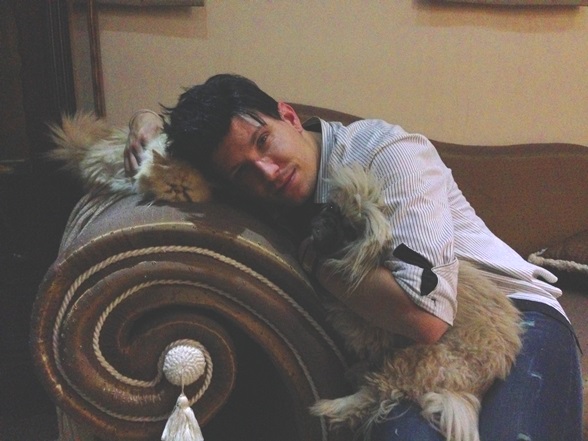 Rudi is also mad about the Smurfs.  Some people believe in Santa Claus and the fairies and he believes in the Smurfs.  He feels there must be a family bloodline…they are just blue and a bit smaller, and often dreams about spending afternoons with them.  “Scary but true” he laughs. 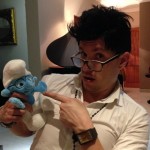 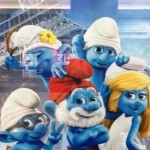 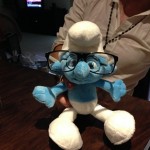 One of Rudi’s favourite pastimes is cooking.  “It’s only recently that I started cooking because I never trusted myself and then as a result of what life sort of catapulted me into and had to experience, I started cooking and it turned into a survival thing for me and I was forced to play around with it.”  His favourite dish is Alfredo pasta, but he also loves Mediterranean, flavourful dishes and spicy food (Mexican in particular).  What would cooking be without some wine? Rudi says he likes to taste different wines and regards it to be a very romantic, expressive thing to drink and has a voice of its own.  He feels that even those who have a less enthusiastic palate will be made to think differently when they are introduced to a good wine. 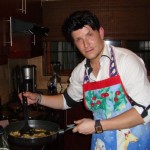 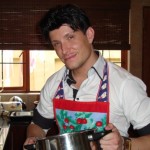 He loves to read, especially Jane Austen’s work which he feels most people today can associate with.  He is a hopeless romantic and also loves reading and writing poetry.  His favourite poets are Sylvia Plath, Virginia Woolf and Ingrid Jonker, a gem from South Africa who soared through such parallel universes of the mind and understood the nature of a non-judgemental fashion and to truly write from the perspective that the heart is the ruler.  When he writes poetry, there is usually no sense of rhyme but it comes from a very true place, sometimes a dark place but he chooses to channel the darkness so that he’s not necessarily consumed by it.

He used to be a figure skater and learned hip hop in the U.S.A where he resided for about 3 years. He loves the outdoors, swimming and especially camping. His love for the ocean and islands enhances his creativity.

He’s not mad about snakes and flying, so “Snakes on the plane” was not on his Top 10 list of movies to watch.  Whenever he flies, he makes sure that he has calmettes on hand and manages to convince the air hostess to give him a dinky bottle of wine to help calm the nerves.

What advice does he have for aspiring artists?

“I still believe that talent is the bigger thing of the day. I’m often scrutinised for this but I believe that we are sending lots of artists out there who don’t fit the criteria.  There are many entertainers but I prefer to work with singers.  I appreciate the gift of a voice.  A person must have a humble nature connected to what they do, understanding that yes, I’m working hard, yes, I’ve being doing this for years, yes, I’ve been trying, and yes, I’ve been leaping, but it’s part of the process.  It makes us who we are.  The biggest challenge is to get yourself out there, so if you’re singing outside a pharmacy in Johannesburg like I did, then that’s what you do.  But the more you can do, the better the chance or the opportunity that someone will recognise your talent and indulge in it and take it further. Get yourself out there, do the work, because in this country where our industry is much smaller than people perceive it to be, you have to work ten times harder than your label does, so don’t give up, work, work, work.  The ones who need to be heard, will be heard.”

Rudi believes that 2014 is going to be his year.  Despite 2013 being a really rocky year for him, it ended off well with two of his songs “Lied vir Corlea” and “Hart en siel”, sung by Jennifer Zanudio, being nominated for “Song of the year”.  In “Lied vir Corlea”, Rudi wrote a letter about his 13 year friendship with Corlea Botha.  It had nothing to do with music.  It was not even meant to be a song, but it ended up as a song and won the “Song of the year”.

Although he couldn’t give too much information away, two international female artists have chosen his songs to be included in their upcoming albums.  He will also be releasing albums in Germany and the Netherlands which will also be distributed in France.  His first English album will also be released later this year.

All “Liefling” fans should hold onto their hearts as he’s been blessed with more creative energy that will touch so many hearts again.

Rudi is also very comical and will be combining this with his musical talents in his new production called “Van my wysie af”, which encapsulates what 2013 was for him.  He felt that he physically lost the melody of what he was writing, but as all things come to an end, so did that feeling.  He doesn’t look back and judge himself or think he’d want to change it, because if that hadn’t happened he wouldn’t be the full person that he is today.

Nelson Mandela taught us that it’s the light and greatness that we’re scared of.  The moment you become great, people expect something and there’s a way that you have to write.

Rudi’s theory is that he takes part of the ocean for his mind.  The even flow of water keeps him afloat.  “If you can’t stay on the surfboard, then rule the water and stay on top of it; that’s what I do.”