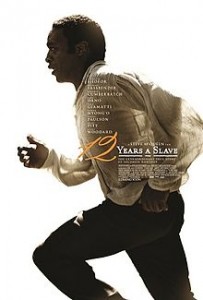 Based on the 1853 memoir, Solomon Northup (Chiwetel Ejiofor) was a free African American man residing in Saratoga Springs, New York with his wife and two children and working as a carpenter and violinist.

Northup was approached by two circus performers who wanted him to travel with them to Washington for two weeks work.  The two men drugged Northup who woke up in a cell and was soon to be sold as a slave.

Northup, who was re-named “Platt”, was sent to New Orleans where he spent most of his twelve years working as a slave for William Ford (Benedict Cumberbatch) and Edwin Epps (Michael Fassbender).  He found favour with Ford but was not as lucky with Epps who regularly had him beaten, amongst other things, for not picking at least 200 pounds of cotton every day.

During his twelve years as a slave, Northup kept his family life private and did also not disclose that he had been educated fearing further repercussions.

The movie also stars Lupita Nyong’o (who portrayed Patsey, the young slave who picked the most cotton each day and who suffered at the hands of Epps’ wife and eventually himself), Sarah Paulson, Brad Pitt and Alfre Woodward.

It’s one of those movies that at the end you find yourself reading the credits, listening to the music and trying to make sense of how people can actually treat one another in such an atrocious manner.